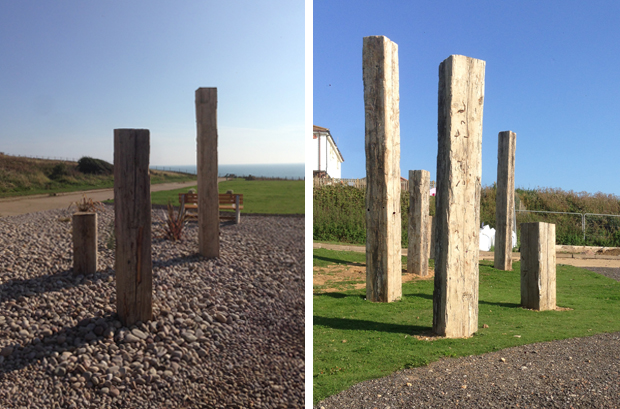 Peacehaven Council, Sussex, approached us to landscape design a new park they had acquired funding for. Features within the park had already been built e.g. the meandering tarmac path. We were brought in to enhance the site and bring some cohesion and flow to the space, around these existing features.

Peace Park is situated on the windswept cliff top in Peacehaven, and is also the entrance to the Coastal Path that takes you down to the rugged beach at the base of the cliffs.

The Coastal Path is a little inconspicuous and the Council were keen to make the entrance more apparent to attract visitors from the main road.. The park itself was an open grassland with scrub between the park and the road. As part of the town Twinning, Peacehaven wanted to build a Petanque pitch to celebrate with their Twinned town, Épinay-sous-Sénart, in the summer of 2015. There was also a need to create a place for reflection and for the siting of memorial benches, as well as a space for children to play and for wheelchair users to access easily.

The path was existing, and the siting of the Petanque pitch had been decided. We worked around these elements to create a cohesive space, ensuring the whole site was usable and exciting, while also providing interes

We created areas for different activities. The existing path now meanders around a gravel garden, that links to the coastlines nearby. Reclaimed oversized timbers were placed in the ground vertically throughout the space to create a dramatic feature visible from the road, highlighting the parks presence. These were also used in the natural play area along with grass mounds for children to run around and over.

A contemporary timbery was designed, a play on ‘rockery’, using these reclaimed timers (still in construction) that will eventually be interplanted. A chalk grassland meadow was designed into the space, and a huge sweeping border linking the top of the park to the petanque pitch at the bottom.